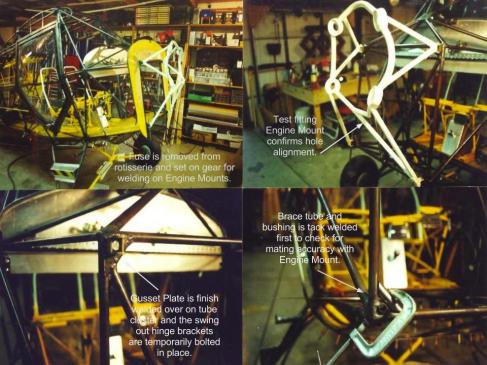 Before proceeding further with the Belly Panel project, I decided to move on to the Engine Mount installation.

There are certain welds on the airframe that deserve more attention and respect. These include the wing spar brackets, wing strut brackets, spar crossover tubes,  landing gear brackets, tail feather attachments and the Engine Mount Brackets.  Every weld is important but a a bad weld on the engine mount can ruin your day.

This project starts by first taking the fuse off the rotisserie to expose the front end of the airframe.  The four airframe connection points must be accurately welded to agree with the chosen engine mount holes and the engine mount must agree with the engine you plan to use. My future plan was to use a Lycoming or Superior 180HP Engine and for now all I needed to do was decide on which type of Engine Mount to use.  There are basically two types of mounts – conical or Dynafocal.  The Dynafocal Mount is said to reduce noise and vibration inside the cockpit and the swing out feature sounded good in theory. The installation needed for the swing out feature will require careful alignment of the top and bottom brackets on each side so that the hinges will not bind and stay in alignment. There is no means of adjustment for a misaligned hole so careful tack welding and trial fitting is necessary to assure proper fit of the Engine Mount.

In later years I would discover that the swing out Engine Mount is not as practical for servicing the engine as it sounds.   As you can imagine, the throttle cable, mixture cable, carb heat cable, magneto cables, oil lines and numerous electrical connections disallow any means of hinging the engine away from the firewall without first disconnecting everything.  Only during a major service event will the swing out Engine Mount feature be utilized.