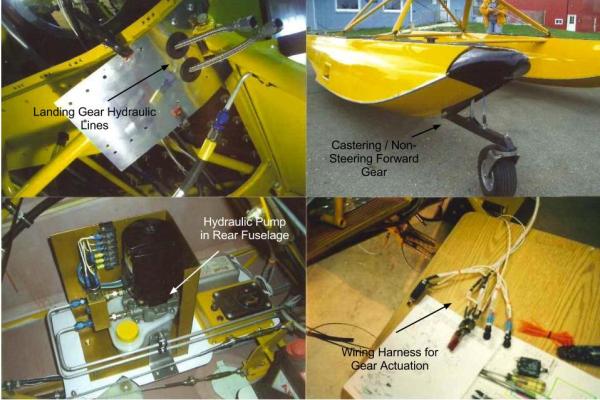 Taking 13 years to build this airplane came with a price.

Have you heard of an AM/FM CD player, a VOR antenna, and a hydraulic pump to raise and lower the landing gear?  By the time I was done building the airplane all of these items were obsolete and replaced with something newer and better!  The tape deck was replaced with a tiny MP3 Player.  The VOR was replaced with GPS and the hydraulic pump was replaced with an electric motor system.  For seaplane preparation I made an extensive installation of a hydraulic pump, oil line network and electric plug and play set-up.  The hydraulic system is used to raise and lower the two main gear wheels and the castering forward gear.  I made the pump demountable so it would only be carried when floats were attached. The wiring harness and all the gear warning lights were all pre-wired with easy plug-ins.  All I needed were the floats.  As with the other afore-mentioned items I  became aware that my extensive accommodation for hydraulically operated floats was no longer needed.  The float company now uses an electrically driven motor system.  They did offer to buy back the pump if I purchase the new floats but how about all the oil lines and electrics I installed previously.  Oh well, I’m just too slow a builder to keep up with technology!

PS; The Clamar floats pictured above are on Larry Bauers seaplane and use the same hydraulic system as described above.