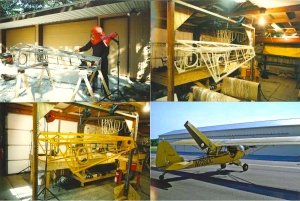 After the metal fabrication and system testing of the lift and lock mechanism was complete it was time to finish and protect the metal.  A backyard sandblasting set up was used to clean and prepare the metal for paint.  This set up was used for all smaller parts like tail pieces, rudder, landing gear legs, etc.  I found out that sandblasting is very messy and its impossible to recover used blasting material when you do it outside. All future sandblasting was done by Southwest Sandblasting in Grand Rapids who do an outstanding job.

After the turtledeck was sandblasted it was cleaned with MEK and hand brushed with a 2 part epoxy primer from Randolph Coatings quickly followed by a 2 part epoxy J-3 yellow finish color.  The 2 part epoxy paint protects the metal from corrosion and is impervious to MEK and all other Poly Fiber chemicals used for fabric attachment and finishing.

Because the inside fabric of the turtledeck can be seen when it is raised I used untinted Poly Brush to avoid having pink brush marks visible.